I have been absent from blogging for several days.  My life has been extremely stressful for the past couple of weeks.  But things are looking up.  Well, sort of.  I’m going to get the rare opportunity to escape the reality of life’s stress and have my very own little play party.  Seriously.  At risk of turning you completely green with envy, I’m gonna let you in on my exciting week to come.

♥  Tomorrow my baby boys will be home.  All of them.  All five.  In one nest.  At one time.  The last time that happened was Halloween.  Yes, I realize that was only a few weeks ago, but it feels like  FOR.EV.AH.  I feel like a kid on Christmas Eve.  I am slightly excited.  Somebody might better remind me of that tomorrow when I’m in the middle of cooking for my clan!  It takes a lot to feed these turkeys. =D 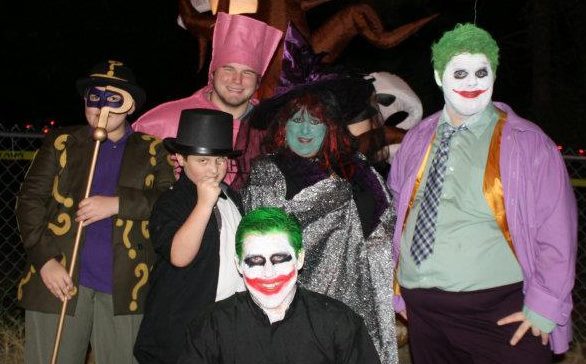 ♥  Wednesday morning we will pull out and head for the Big D.  We will be staying a few days with my aunt and uncle who are the ultimate hosts.  They have one of those houses that is beautiful, scarily clean, yet comfy.  I love going there.  I can forget the worries of housework, because somehow their house is always clean.  No matter how many people they have over.  It’s weird how that happens.   Plus, she is cooking Thanksgiving dinner for us.  All we were asked to bring is drinks for our family.  A whole, entire, Thanksgiving meal that I don’t have to cook.  Woohooooo!!!   I will be happy dancing all the way to Dallas!

♥  So, let’s see.  We are up to Thursday, Thanksgiving Day.  It’s Cowboy time ba—beee!  We are ALL loading up and heading out the Dallas Cowboy football game.  It will be my first NFL football game.  We are even gonna do a little low-key tailgating.  Another first.  I think I will add that to my Pushing Up Daisies List, just so I can mark it off.   I just might be happy dancing in my sleep! 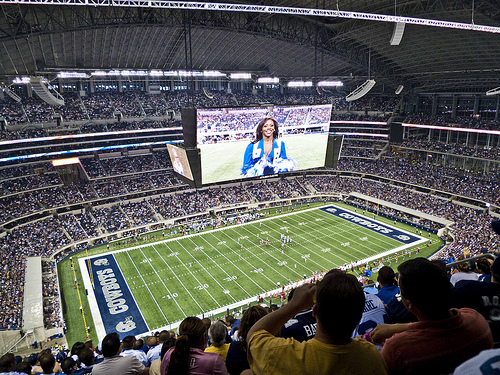 ♥  And, then, it’s the Big Kahuna……..the whole enchilada…….the be all, end all, of the ultimate Thansgiving holiday……..Black Friday!! Sales start at 10pm.  I will be there with my game face on!  And, on top of the ultimate shopping as a contact sport experience, the hubby will be taking the kids back home.  So I will also finish the trip with a kid-free night.  Retail therapy and girl time!!   Woop!  Woop! 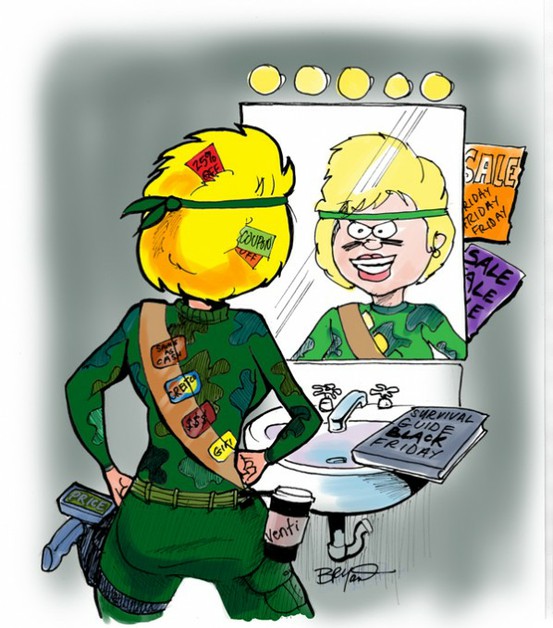 And as if that’s not enough to make you roll your eyes and wanna slap me silly………all my Christmas decorations are up and running.  Lights twinkling.  Christmas music playing.  The kids advent calendar is almost finished and ready for lift-off.  I will come home ready to wrap gifts and enjoy the Christmas season.

Have I ever told you quitting my job and becoming a stay-at-home mom was the absolute best thing I ever did?  Well, it was and I’m telling you now.  I am completely blessed and overwhelmed by the love and grace of my heavenly Father.  I’m just hard-headed enough to fight tooth and nail.  I was just certain we couldn’t financially make it one one income.  I’m living proof that if you will follow God’s calling on your life, joy and contentment will find their way to you.  I am so blessed to have Him directing my life.  Him loving me through my hard-headed ways.  Him pushing until I surrendered.  So this week, although I might be MIA from the blogging world (I’m gonna try, but can’t make any promises.), I will be praising God for the many blessings in my life.  Getting recharged.  Refreshed.  And I will for sure be having loads of FUN!!!

And for all of this, I’m truly thankful.

Today has been some kinda day!  Busy every moment.  Yes, EVERY moment.  It has been chaotic!   Til now.  Yay!

Since I used up all my emotional energy, my thinking cap is burnt out, and I’m just plain ole tired, I decided to bless you with a random list!

♥  Tonight was our church Thanksgiving meal.  Food was everywhere.  Seriously.  Tons. of. food.  But you know what was the absolute BEST thing about it??  My boys telling me (on the way home), “I just didn’t like anything they had except the dumplings, cobbler, and acorn cookie thingies.”  What’s the big deal about that??  Momma made all of those things!!  And believe me, we have some master cooks in our church.  So that’s a HUGE compliment!  Momma is rocking the kitchen….. and by Momma, I mean ME.  =D

♥  Speaking of acorn cookie thingies….. I made two things I found on Pinterest.  Yessirreee, Bob.  I made the acorn thingies AND pilgrim hats.  I was really hoping to get a pic, but since we were running last minute finishing them, I didn’t.  And they were all gone after the dinner.  Yay! 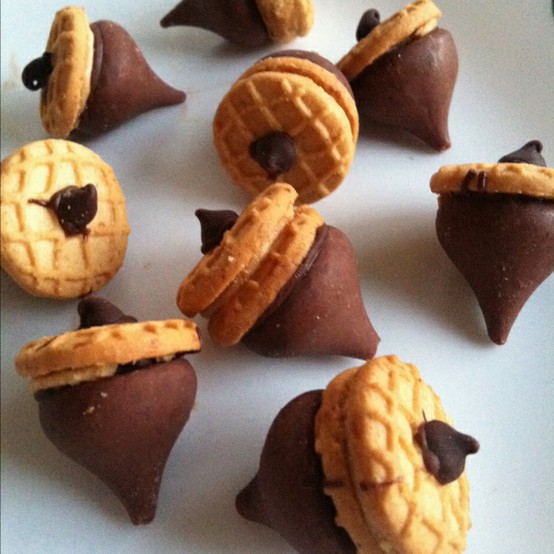 Pic from Pinterest…….but mine were adorable, too!

♥  I realize today I’m using the word YAY a bit too much.  But, it just really reflects my mood.  And since my ADHD is in overdrive, I just don’t want to try to come up with anything else.  At the risk of sounding redundant….YAY!

♥  I have got to get off my patooty and find my battery charger for my camera.  For some reason, I can never keep up with that thing.  Oh, wait, the reason is I’m totally scatterbrained.  Yep, that’s it.  Couldn’t keep up with my rear if it wasn’t attached at the hip. 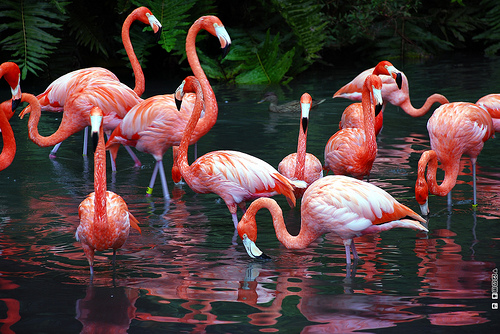 ♥  I don’t really watch the news much anymore.  It’s WAY depressing.  But my mom was telling me about this old pervert coach from Penn State who has been abusing young boys for YEARS.  So, I’ve just gotta say, every staff member and friend that knew about this crap and did nothing should be sent up the river with him.  Oh, and telling someone who did nothing is not enough.  You keep telling till someone does something.  Everyone of them………up the river.

♥  Some people crack me up.  Since this month is Thanksgiving, Facebook is over-run with thankful posts.  And yes, I’m posting them too.  Don’t judge.  It’s not a bad thing.  But what cracks me up are people who actually post the same thing (with different wording) almost every day.  Some people have such tunnel vision that all they can see is themselves.  So they just keep saying the same things over and over and over.  Oh, oh….and how about the “I’m thankful for my dad, sis, bro, mom, dog, son, daughter, house, job, and car.  That will do for the first half of the month.”  Seriously?  Are you really thankful?

♥  And then there’s THOSE  OTHER people.  You know, the ones who apparently have nothing better to do than sit around count how many times someone has posted the same thankful post.  And then they have the nerve to rate someone’s thankful heart just based on a stupid FB post.  Geeeeeeezzzzz, S.O.M.E.O.N.E. needs a life!

♥  Do pajamas really have to match?  I mean, does it really matter if my PJ pants and my top match?  When does it matter?  When I have company over?  When I go visit someone else?  Or never?  Really?  Is it important?

♥  And now my pet word must be really.  Just in case you didn’t notice.

♥  Hurley on Lost just needs to shave.  I don’t care if you’re stuck on a deserted island.  Just shave.  Dude, it’s really gross.  And hey, there was all kinds of junk in the wreckage.  Surely you can find something to shave with.  Jin is ALWAYS clean shaven. 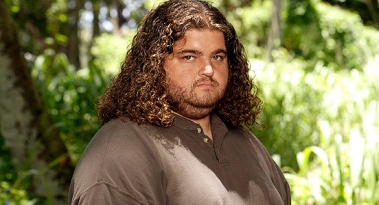 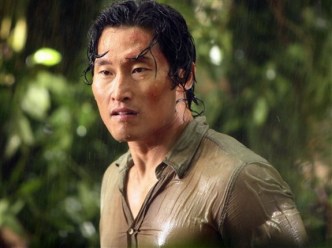 ♥  Have I told you I get to go to the Dallas Cowboy football game on Thanksgiving Day?  Yep, I’m just that cool.  Gonna tailgate and everything!  Plus, the Black Friday sales start at 10pm Thanksgiving night.  Just makes me so excited I’m giddy.  I get butterflies just thinking about it.  Next week is gonna be good week.

♥  Speaking of Black Friday…….I better go browse the ads.  They are already online and I’ve taken a peek at them, but I need to start making a plan of attack list.  I would go into detail, but that’s definitely  for another post.  Besides, all I can think about now is…. 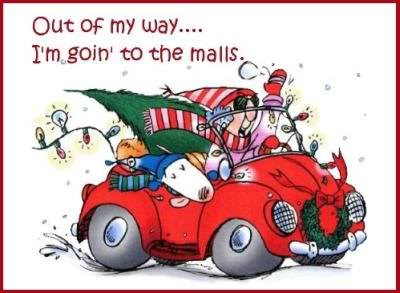 Posted by Robin on November 16, 2011 in Randomocity